Canadian Prime Minister Justin Trudeau’s wife has tested positive for the new coronavirus, his office announced on Thursday night.
The statement said Sophie Gregoire Trudeau was feeling unwell and would remain in isolation.
According to Aljazeera news, The first lady of Canada had returned from a speaking engagement in Britain and had mild flu-like symptoms, including a low fever, late on Wednesday night.
“The Prime Minister is in good health with no symptoms. As a precautionary measure and following the advice of doctors, he will be in isolation for a planned period of 14 days,” the statement added.Foreign Affairs Magazine subscription in Pakistan
His office said the doctor’s advice to the prime minister is to continue daily activities while self-monitoring, given that he is exhibiting no symptoms himself. 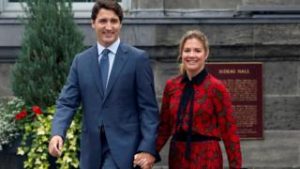