The United States is pushing relations with China to “the brink of a new Cold War”, China’s foreign minister said on Sunday, rejecting US “lies” over the coronavirus while saying Beijing was open to an international effort to find its source.

Keeping up the worsening war of words with Washington over the pandemic and a Beijing move to tighten control over Hong Kong, Wang Yi said the United States had been infected by a “political virus” compelling figures there to continually attack China.

“It has come to our attention that some political forces in the US are taking China-US relations hostage and pushing our two countries to the brink of a new Cold War,” Wang told reporters during a press conference at China’s week-long annual parliamentary session.

Longstanding friction between the two powers over trade, human rights and a range of other issues have been pushed to new heights since the virus outbreak.

Wang did not identify what “forces” he was referring to, but US President Donald Trump has led world criticism of China’s initial response to the pandemic, which has caused more than 340,000 deaths and economic carnage worldwide.

Trump and members of his administration have said China covered up the emergence of the virus late last year and bungled its initial response.

Washington’s criticism has been widely seen in the United States as an attempt by Trump to divert attention from the White House’s own Covid-19 failures.

Wang took an apparent swipe at the US struggles to contain the virus, which has now infected more people in the United States than anywhere else.

He said China was “open” to international cooperation to identify the source of the novel coronavirus, but stressed that any investigation must be “free of political interference”.

This article is originally published in Dawn News

Also read:
Johnson & Johnson talc baby powder is causing cancer?
Pharmaceutical giant Sanofi to give the US first access to its Covid-19 vaccine 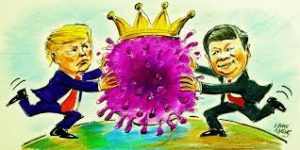