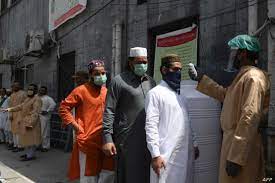 THE coming weeks are critical for Pakistan’s Covid-19 response. With a national positivity ratio of 10pc and an average of over 150 daily deaths this week, the situation is as alarming as ever. According to NCOC chief Asad Umar, the number of critical-care Covid patients on oxygen reached 5,360 on Friday — a figure that is 57pc higher than last June’s peak.

Though the federal minister tweeted that the government is working on building oxygen capacity, given the rate at which the virus is spreading it may not be enough. As the nightmare unfolds in India, the desperate search for oxygen appears to be a key feature in the heartbreaking pleas of citizens who turn to social media for help.

Even at Pakistan’s current positivity rate, oxygen availability continues to be a major constraint. Any higher, and the country will be plunged into the hell that India is living through right now. Along with oxygen availability, trained doctors are a finite resource. If the hospital inflows of critical-care patients increases, hospital staff will be left to make the heartbreaking decision of who lives or dies — a reality we have seen in Italy at the start of the pandemic and now in India.

Given these realities, SOP compliance and prevention in the last two weeks of Ramazan are vital. The alternative will be the near total collapse of the country’s healthcare infrastructure. The end of Ramazan usually sees huge crowds in indoor markets set up for Eid shopping. And on Eid, families make multiple visits in a day to relatives —largely indoors as temperatures are high. If Eid activity continues as per normal, the post-Eid period will be dark. Here, the government’s efforts to enforce SOPs and send the right message are critical. Unfortunately, even public officials, such as the KP health minister, Taimur Jhagra, are seen violating restrictions. At a time when the provinces need clear leadership, such a message is devastating for the Covid-19 response.

Even if Pakistan emerges from the third wave peak, the Covid-19 threat will not go away. With restrictions not enforced, compliance levels go down and the infection spreads with a vengeance. Pakistan has one of the lowest vaccination rates in the world — a tragedy given how much the healthcare system, economy and education have suffered in the pandemic. Though the government has now announced vaccinations for those who are 40 and above, the fact is that we have managed to vaccinate only 2m of our 220m population.

The government expects to get 15m new doses of the vaccine in the next two months, but it must have a better plan in case of delays. Till now, the vaccines being administered in the country are largely donations from other countries or private imports. The government must do more to strengthen its vaccine programme, or face the consequences of Covid waves every few months.