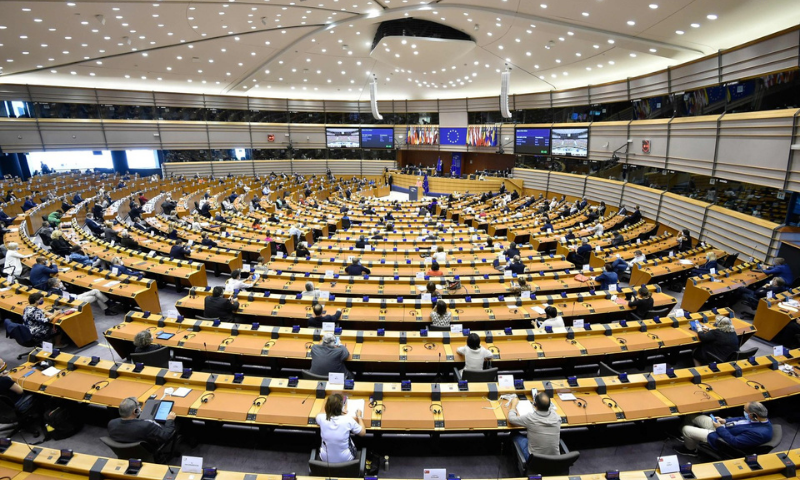 LONDON: The European Parliament this week adopted a resolution calling for a review of trade relations with Pakistan and ending its eligibility for the Generalised Scheme of Preferences (GSP) status.

The resolution linked the review to Pakistan’s blasphemy laws, in particular the case of Shagufta Kausar and Shafqat Emmanuel, who have been on death row since 2014 for sending ‘blasphemous’ text messages — a charge they deny.

The text called on the European Commission and the European External Action Service (EEAS) to “immediately review Pakistan’s eligibility for GSP+ status in light of current events”.

It also said there is “sufficient reason” to initiate a procedure for the temporary withdrawal of this status and the benefits that come with it.

Human Rights Minister Shireen Mazari reacted to the development. “We have issues to resolve but there has been more movement now on our HR Int Convention commitments than in previous govts. The way forward is dialogue & negotiations, which we have been doing, not extreme public positioning,” she tweeted.

The EU’s GSP allows products to come into the EU market from vulnerable developing countries without import duties. The scheme slashes tariffs to zero per cent for vulnerable low and lower-middle income countries that implement 27 international conventions related to human rights, labour rights, protection of the environment and good governance.

Pakistan was granted GSP+ in 2014 and the EU is one of its biggest trading partners.

The resolution noted that blasphemy cases incite harassment, violence and murder against those being accused. It also mentioned an “alarming increase” in accusations of blasphemy in Pakistan over the past years.

“Judicial procedures in blasphemy cases in Pakistan are highly flawed,” the resolution said, adding that there are low standards of evidence.

It noted that “Pakistan continued to deteriorate in 2020 as the government systematically enforced blasphemy laws and failed to protect religious minorities from abuses”.

The text of the resolution said “repeated and deceptive attacks against the French authorities” by radical groups and statements made by the government on the issue have escalated.

The resolution also noted that a ruling party member tabled a resolution in the National Assembly demanding a debate on the expulsion of the French ambassador and said “violent demonstrations and attacks against France [are] unacceptable”.

“[The European Parliament is] deeply concerned by the anti-French sentiment in Pakistan, which has led French nationals and companies to have to leave the country temporarily,” it said.

Though the resolution in itself is not formally binding, the Council of Ministers may endorse it and commit to policies or actions in the future.

Member of European Parliament (MEP) Charlie Weimers of Sweden co-authored the resolution. He tweeted: “Should Europe reward Pakistan’s mob justice targeting Christians and its Prime Minister relativising the Holocaust? My answer is no.”

In 2018, a member of the European Parliament called on the EU to withdraw Pakistan’s GSP status due to the death penalty. “This position stands in contrast with European trade policy, especially evident in the trade benefit programme GSP+,” Barbara Matera had said.

According to the European Commission, the EU is Pakistan’s most important trading partner. “As a result of GSP+, more than 78% of Pakistan’s exports enter the EU at preferential rates. Around 80% of the textiles and clothing articles imported to the EU from Pakistan enter the EU at a preferential tariff rate. Around a quarter of these imports are bed linen, table linen and toilet and kitchen linen,” a country profile on Pakistan said.

While reacting to the development, the FO regretted that the discourse in the European Parliament was ill-informed about the context of blasphemy laws and associated religious sensitivities in Pakistan.

The FO statement also rejected the criticism of Pakistan’s judicial system and domestic laws as unwarranted and regrettable.

It noted that Pakistan is a parliamentary democracy with a vibrant civil society, free media and independent judiciary, which remains fully committed to the promotion and protection of human rights for all its citizens without discrimination.

“We are proud of our minorities who enjoy equal rights and complete protection of fundamental freedoms as enshrined in the Constitution. Judicial and administrative mechanisms and remedies are in place to guard against any human rights violations,” the statement said.

It recalled the measures taken by the government for promotion of freedom of religion or belief, tolerance and inter-faith harmony.

The FO urged the international community to show a resolve to fight xenophobia, intolerance and incitement to violence based on religion or belief and work together to strengthen peaceful coexistence.