Zahid Ahmed doesn’t get why actors are so politically correct

Zahid Ahmed’s face was split in two halves; one, fully made up with women’s make-up and the other, male.

This powerful initial glimpse from the 2019 drama Ishq Zah-e-Naseeb was followed by an equally impactful teaser, where Zahid was seen applying lipstick. The drama that followed won critical acclaim for shedding light on the plight of individuals suffering from dissociative identity disorder and for the performances of its cast.

Shining the most was Zahid Ahmed, effortlessly, as he balanced the two sharply contrasting sides to the character that he was playing.

It was an extraordinarily difficult role that he enacted extraordinarily well. And while Zahid had been recognised for past performances as well, this drama was particularly noticed because of its unconventional storyline.

This was an actor to watch out for. What was he going to do next? Apparently, a drama opposite Sonya Hussyn — also his leading lady in Ishq Zah-e-Naseeb — was in the works and he was about to make his cinematic debut in Ghabrana Nahin Hai, co-starring actress Saba Qamar.

This article is originally published in Dawn News 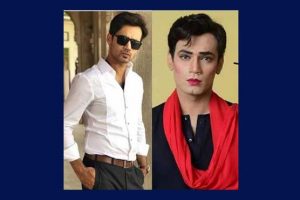